You'll have to excuse the quality of these photos of my card but I was so happy with the way it turned out that I wanted to share it straight away. It's night time here so had to photograph it inside and I have downlights so there are shadows no matter which way I had the card.. so I'll try and take a better picture tomorrow... Anyway this weeks challenge at Magnolia-licious is an inspiration challenge..

As soon as I saw this I knew what I wanted to do and using this weeks The Sweet Stop Sketch it all just came together... and this is the end result!!!
So I took my inspiration from the tree and the presents and with these gorgeous kaisercraft papers and magnolia stamp, the rest just flowed onto the card. 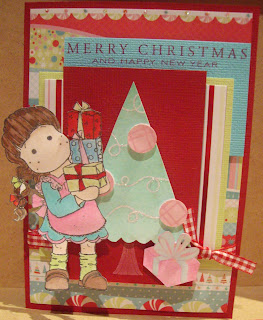 This is the front of the card, it's 3-D. I tried to take a photo of it so you could see all the levels but just can't seem to to get the right angle!! 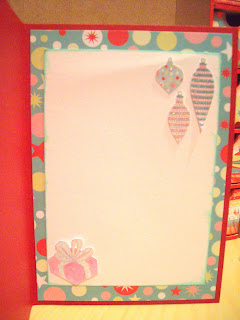 This is my 2nd post for today, please scroll down to see my other post!!
I have a few things to do tonight including some exercise so this is just a quick post!! I am entering this card into this months Bizzy Bec's Creatalicious Challenge which is a sketch by Bec with distressing  and also the Delicious Doodles very first challenge which is anything goes... You can use anything on your card but if you use a digital doodles image you will be entered into the draw to win a prize twice!!! I usually make traditional coloured Christmas cards but I just love how this card turned out and I plan on making more!!!! 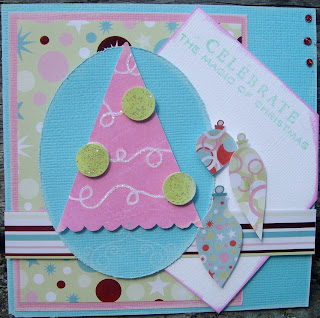 This is the first of my two blog posts today. Feels like ages since I've posted on my blog... I have so many craft projects that I am trying to get done at the moment as well as other things that life involves so making cards seems to be the last thing to get done. But last night I decided to sit down and do some challenges. This card I am entering into the Just Magnolia Challenge which asks for white + 1 and also Magnolia Downunder Challenge which is a sketch. I love the colours of this card as it's my favourite colour but I think I may have overdone it with the stars!! It's a pretty simple card but I  like the way it turned out.. I haven't put a sentiment on it yet as I still can't decide what to put on it... 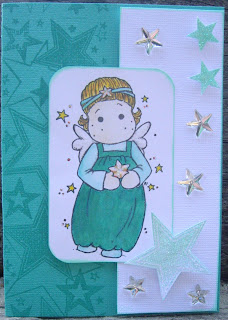 This is the project I am currently working on!!! I'm still not sure how to decorate the main square but I'm waiting for my Kaszazz order to arrive so I have a day or two to decide what I'm doing!! 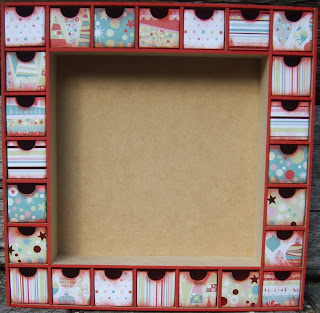 Just Fairy Christmas.. and some pics from our "C" Party

Just a quick post tonight as I have heaps to do and of course no time to do it in!! LOL!! The story of my life really!! Anyway, I made this card and had planned to enter into the Lily of the Valley blog challenge but I've just missed out on that one. So I'm entering this into Just Magnolia where Donalda has done a sketch. I'm not really sure if I like what I have created but I keep looking at it and think yeah it turned out ok. Probably not one of my best creations I think because there are different shades of red but then I am my own worst critic. I've also entered this card into a couple of other challenges that I have found through Feline Playful who lists a heap of challenges daily!! It takes the chore out of looking!! LOL!! So I've also joined in with the fairy tale challenge blog which is "anything goes"  and Christmas stampin all year long where you have to have stripes on your card somewhere... Anyway, I'll stop waffling, here's my card!! 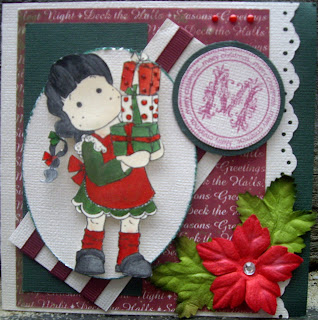 Sorry the pic is not so good as it's been a dull and dreary day here today!!
Ingredients
Papers: Kaszazz
Flowers: Bizzy Becs
Stamps: Magnolia and Kaszazz
Colouring: Twinkling H20's and aquacrayons
Ribbon: Stampin' Up
And now for a few pics from my sisters dress up party: We had to dress up as something starting with "C"

My four year old was a chef 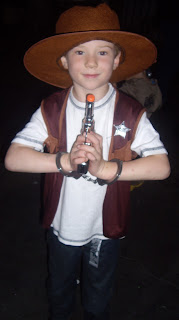 My five year old was a cowboy 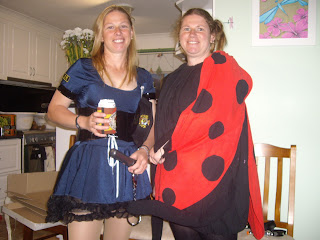 I am in the middle of baking, in 27C heat for my sister's 21st. She is having a dress up party tomorrow night, we have to dress up as something starting with the letter "C". My boys are very excited - My oldest is going as a cowboy and he finished off his outfit today with a gun and some money... Cos he tells me Cowboys steal money...LOL!!! My youngest is going as a Chef, he got a masterchef apron and hat yesterday.. I am going as a ladybug.. I hear you saying that ladybug doesn't start with C, well you're right but Cute Critter does... hehehehe... One of the wonderful teachers ( they are all wonderful by the way:) ) at my oldest sons kinder owns the ladybug outfit and I borrowed it earlier in the year for another dress up party I was invited too...so when the theme for this party was revealed I thought I could borrow it again... So I will post photos next week of the party!!!
Anyway, I am baking some slices and savoury nibblies for the party, my second passion, and the main reason I'm carrying extra kilos ... LOL!!! At the moment I have Snickers Brownie's in the oven and I have already prepared the chocolate ganache to make white chocolate truffles... Later on I will make melting moments with raspberry icing and lemon slice and tomorrow just before serving I'll make the chicken and bacon vol au vents and the avocado and tomato salsa wonton cups... Hopefully everyone loves the food...
Once everything is cooked i'll plate it up and take a photo of it and add it to this post..

# Sorry about the glare, was quite late when I took the photo!!!﻿ 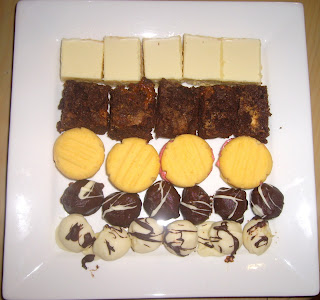 From the top: lemon slice, snickers brownies, melting moments with raspberry icing, and white chocolate truffles covered in white and dark chocolate
But for now i thought I'd share the card I made for my son's 4th Birthday last week... he's into dinosaurs at the moment so I made this simple but oh so cute card!!! 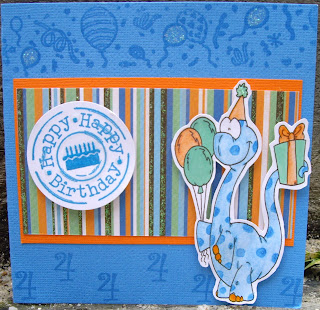 I also made him a jigsaw dinosaur cake... I actually made two cos my 4 year old had one with his brother and I on his actual birthday then another one for his party... They both turned out well ....﻿ 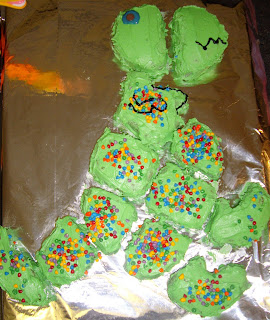 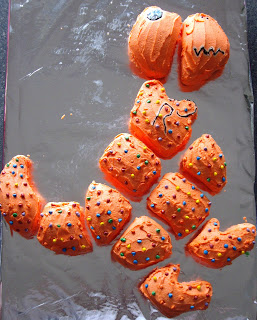 Sorry the photos aren't the best, taken at night..

Last night I decided to join in  with the Lil Lolita Boutique challenge which asks to make something that is black and white + 1. Tickled Pink stamps monthly challenge has a sketch so i decided to follow the sketch as well and while I was looking at the Feline Playful blog I scanned down the list of this weeks challenges and saw that the corrosive challenge blog was to create something black and blue so thought that this card was suitable as well. So this Lil Lad has been entered in three challenges this week! I really like the way the card turned out, I changed the sketch slightly but you can still see the elements in it!!! 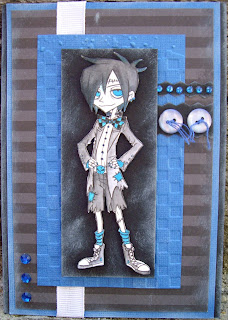 I have been offline for a couple of weeks as I had gone over my download usage so it took forever for pages to load but I'm back and have lots to share so I will have a few posts tonight!!! So bear with me and enjoy!!! I saw a card like this a few weeks ago and loved it so I found a template here at Mirkwood Designs and after choosing papers this is what i came up with: 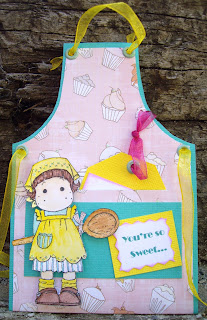 I've decided to enter this into the Just Magnolia Challenge this week which is anything goes with the options of adding Beads.. I haven't added any beads but thought this was perfect for this challenge. I've also decided to enter it into a new challenge which started today ...Magnolia-licious Challenge. They want to see creations with pink and Yellow!!
Ingredients
Papers - scraps so not too sure
Colouring - Tria marker G637 and aquacrayons
Other supplies - ribbon, eyelets, kindyglitz
Until next time... Enjoy!! xx
Posted by alethea at 9:24 PM 7 comments:

alethea
I am a SAHM to two beautiful boys who are my whole world!! I started this blog as I wanted to share my creations with more people in the hope that I could inspire some of you as I have been inspired by looking at your blogs!! Enjoy looking around!! xx 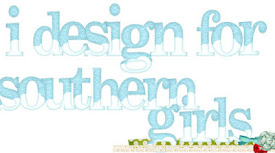